The WAY oF THE HARMONIOUS SPIRIT

"...enter deeply into an attack and neutralize it as you draw that misdirected force into your own sphere."
Morihei Ueshiba - Founder of Aikido
As you practice more often you will find that Aikido:
​It is a classical Japanese martial art developed in the early part of the last century by Morihei Ueshiba, known to Aikido students as O-Sensei (which means Great Teacher). O-Sensei was an extraordinary man, highly skilled in a variety of martial arts, as well as a devoted student of religion and philosophy.

Purpose: O-Sensei believed that the purpose of the martial arts should not only be for self-defense or a way of defeating an opponent. Rather, he felt it should be used as a means of developing ourselves as human beings, and as a way of coping with the stress and confusion of a rapidly changing world.

Movements: In Aikido we don't clash with an attacker head-on. Instead, utilizing circular movements we blend with the attack, leading the attacker into a variety of throws or joint locking techniques. Although Aikido is a powerful and effective form of self-defense, our training has been developed to avoid injury for our partners during practice.

You don't have to be strong or young to practice Aikido. Women, men and children of all sizes and ages can learn how to use 'Aikido' to manage the attacker's intention and resolve conflicts. Practice is geared toward an individual's ability and comfort level when he or she begins, and classes are conducted with a spirit of encouragement. Students help each other learn the techniques, you can learn as much from performing the technique as from receiving it.

Weapons: While Aikido does not focus primarily on weapons practice, the principles for empty-handed movements are related to the defense against weapons. Our club does, therefore, includes some weapons training with wooden practice weapons: the jo (staff), bokken (sword) and tanto (knife). Weapons training should always be taken very seriously. Even though the practice weapons are wood, careless use of them can seriously injure one's practice partner. For this reason, weapons practice is taught at the instructors discretion.

Competition in Aikido: Being non-competitive by it's nature, there are no tournaments or competitive matches in Aikido. Instead you learn through repetitive practice in a thoughtful, studious atmosphere. Aikido practices can be soft and flowing or vigorous and aerobic depending on the desires of you and your partner. Aikido promotes suppleness, flexibility and concentration as well as a confident, balanced personality.
O-Sensei demonstrates some Aikido techniques in this video.  His techniques evolved as he aged.  In one sense, O-Sensei's techniques evolved to accommodate the weakening of his body as he aged.  Thus Aikido does not rely on strength, and can be practiced by most anyone.  But it would be a mistake to think this resulted in a weakening of the techniques.  The techniques became ever more refined to use the opponent's strength against them.  And in O-Sensei's case, he had a highly developed ability to work with his own and opponents' ki (life energy).  This could explain why his demonstrations often look so unreal.  Witnesses would say that it appeared that O-Sensei downed opponents without even appearing to touch them. 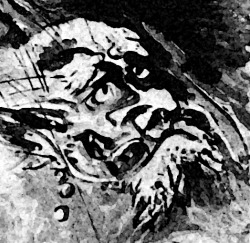 ART: O-Sensei is depicted to the left as the Dragon King.  Ame-no-murakumo-kuki-samuhara Ryuo (the Heavenly Awesome and Enlightened Dragon King) is a "Divine Agency Capable of Eradicating All Evil and Pacifying the World".  O-Sensei saw himself as bringing the impulse of this agency to the World. It is this ethical foundation O-Sensei gave to Aikido which, in large part, sets Aikido apart from preceding forms of martial arts.  O-Sensei himself was exceptionally strong as a young man, and proficient in many martial arts, but he was also very religious and had a strong ethical and social conscience, and went on to develop Aikido as a way of peace, believing that to seriously injure an opponent is to injure oneself, and true victory is victory and mastery over oneself.  Nonetheless, O-Sensei was often challenged in his lifetime and famously defeated the strongest challengers with ease.  O-Sensei, thus, may be considered as a philosopher of non-violence, but of a rather different kind than Gandhi.